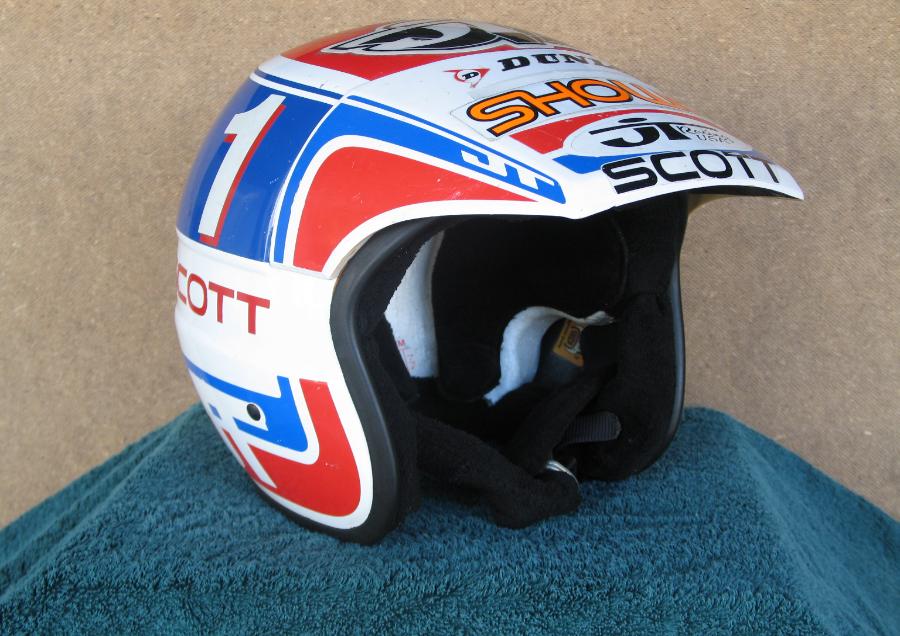 This helmet was owned by Ricky Johnson and painted by his Father.  The helmet was dropped and the visor broke. Ricky never raced with the helmet.

His name was Jake and the company was Competition Suspension in Southern California . My son, Matthew was about 5 or 6 at the time and always came with me to this shop.  Matthew always thought Jake was a great guy and told Jake his favorite rider was David Bailey.  He told Jake that David was his hero and watched him on videos all the time.  On one visit to the shop, Jake told Matthew he wanted to give him something, it was a helmet from David Bailey. After a discussion of how we could not accept such a gift, we finally left with the helmet.  The helmet never left Matthew’s room and was always a source of great pride.  My wife, Matthew and I attended as many pro races as possible and one day I noticed that David was going to be a VIP at a pro race being held at Glen Helen Raceway in Southern California . It was a long shot, but I thought maybe we could take the helmet and get David to sign it.  Well, on the day of the race we kept an eye out for David and finally saw him.  I ran back to the van, got the helmet and we walked toward David with Matthew carrying the helmet.  When we reached David and asked him if he would please autograph the helmet, he thought we had a replica helmet. After looking at the helmet, he said it was really one of his and told us about the tech stickers on the back.  We told him how we acquired the helmet and he said he remembered Jake working on his bike suspension.  David said he did not even have one of these helmets and Matthew offered to give it to him. David refused and we all walked away thinking that David Bailey was much more than one of the greatest riders that ever lived.  Meeting David was a great experience for Matthew and something he never forgot.  It was also about this time that Matthew participated in the Mickey Thompson Stadium Off- Road events.  There was an invitational only exhibition for pee wee riders and he did as many as 12 events per year as far away as Seattle and Denver for about 3 years.  He also got to take part in the autograph sessions and we had an autograph sheet (see attached) made up that he signed and gave out.  It was amazing to see him sitting on his bike with people standing in line to get his autograph (he is 14Y).

Matthew died in a car accident on February 18, 2003, just 14 days after his 16th birthday.  I know he is happy the helmet has found a good home. Thank you again. Neal and Ronnie Clark